A new collection of essays by Jonathan Franzen (Farrar, Straus and Giroux) 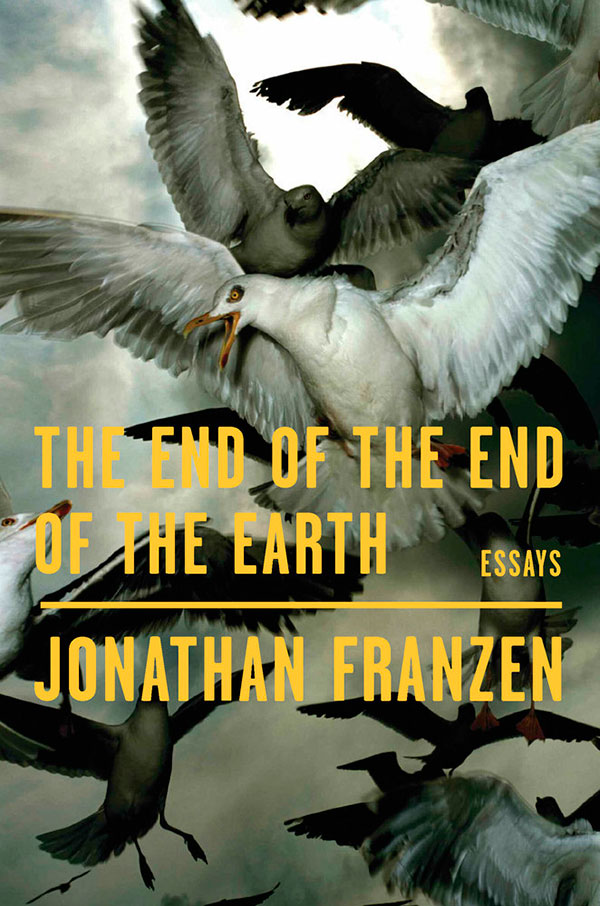 ONE subject comes up frequently in Jonathan Franzen’s latest collection of essays: how to live responsibly in the face of our all but certain extinction as a species.

“Every one of us is now in the position of the indigenous Americans when the Europeans arrived with guns and smallpox: our world is poised to change vastly, unpredictably, and mostly for the worse,” he writes. “I don’t have any hope that we can stop the change from coming. My only hope is that we can accept the reality in time to prepare for it humanely.”

If you’re late to the Franzen game, or know him only through one of the controversies that have dogged him online — He snubbed Oprah! Dissed Edith Wharton! Disrespected the Audubon Society! — this book is a good place to catch up with the acclaimed novelist (“The Corrections,” ‘’Freedom”) whose graceful, trenchant essays are a joy to read even when the subject is terrifying.

“The End of the End of the Earth” brings together 16 essays and speeches written mostly in the past five years, although the publisher chose not to list the original publication date or media outlet. Half are about birds, birdwatching and climate change, subjects he cares about as deeply as literature and writing.

“If you could see every bird in the world, you’d see the whole world,” he writes in “Why Birds Matter,” a lyrical essay that persuasively argues that bird populations “indicate the health of … our ethical values.”

The rest touch on a variety of subjects, including photography, technology and Manhattan, pre-gentrification. One piece published two days after 9/11 shows the limits of deadline journalism because like virtually everyone else in America, Franzen thought things would never be the same.

“In the space of two hours, we left behind a happy era of Game Boy economics and trophy houses,” Franzen says. Well, not exactly. The trophy houses in 2018 are even bigger.

In the final essay Franzen slyly offers up a bit of advice for readers who, like him, worry about finding a moral and ethical way to live in the late Anthropocene.

After noting the human tendency to take the short view, he observes that every minute in America, 30,000 paper cups are tossed even as rain forests are leveled to supply the world with pulp.

“Your life is complicated enough already without dragging a reusable cup around with you all day,” Franzen says. Sure, but reading that sentence, you know that’s exactly what you should do. (AP)

‘The Bone Orchard’ A novel by Paul Doiron