READERS who missed Brady Hartsfield in the second book in Stephen King’s trilogy about a psychotic killer will be delighted to know he’s alive — but definitely not well — in “End of Watch.”

Don’t even think about reading it unless you’ve read the previous two books — “Mr. Mercedes” and “Finders Keepers.”

The final installment begins where book two ended. Brady is awake in room 217 of the Lakes Region Traumatic Brain Injury Clinic. The man who drove a car into a crowd at a job fair and killed eight people is still paralyzed, thanks to a blow to the head from Holly Gibney, but his coma has lifted and his brain has never been more alive.

The story of how it all happens is too strange to summarize here. Something about cheap tablets called Zappits, blue fish and experimental brain drugs. Suffice it to say that King pulls off quite a trick, even for him. His killer can now kill again without ever leaving his hospital bed.

Standing in his way are retired detective Bill Hodges, his partner, Holly, and their mutual friend Jerome Robinson.

King works his customary storytelling magic, unspooling the plot threads almost as quickly as readers can turn the pages. There aren’t really many surprises, but it’s somehow all very compelling even as it feels inexorable.

What King does offer readers is a little more heart than many of his tales. The relationship between Hodges and Holly is truly touching. She’s always been somewhere on the autism scale, but feels the most normal when she’s with him. When Hodges is diagnosed with cancer as the gang tries to figure out how Brady is killing again, it’s Holly he worries most about:

“I’ll try the treatments, sure. But I need a couple of days before I check into the hospital. And right now I need you. Can you come and pick me up?

“’Okay.’ Crying harder than ever, because she knows he’s telling the truth about needing her. And being needed is a great thing. Maybe the great thing.”

To share any more would deprive readers of all the fun. If you’re wrapping up the trilogy, enjoy. If you’re just getting started, you’re in for a thrilling ride. (AP)

‘The Inkblots: Hermann Rorschach, His Iconic Test, and the Power of Seeing’ 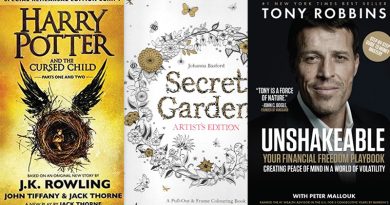