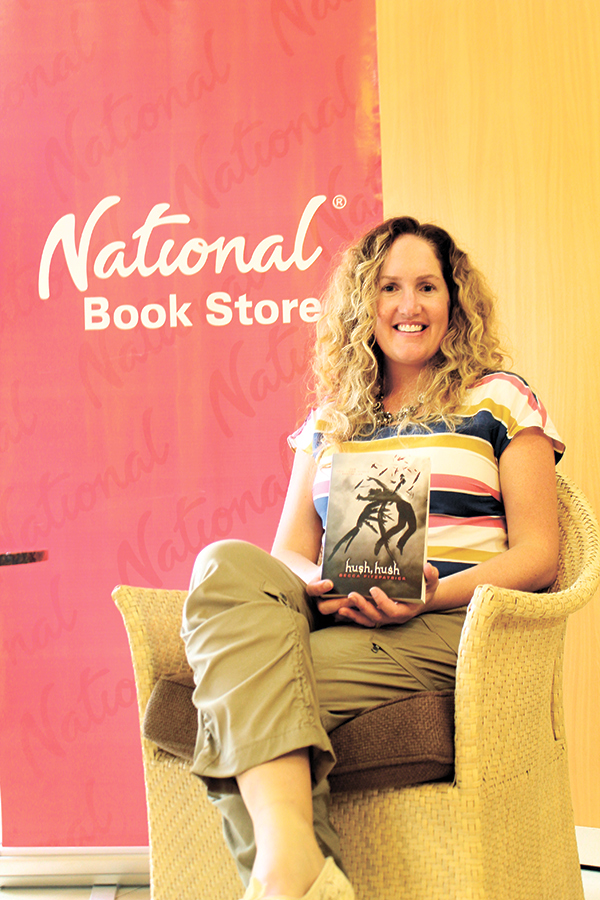 A SACRED oath and forbidden love: these are the elements of danger that are most prominent in Becca Fitzpatrick’s debut novel turned series, “Hush, Hush.” But as much as her stories are rife with danger, Fitzpatrick is one person who likes to play it safe.“I’m a very safe person,” Fitzpatrick admits. “I don’t like danger in real life.”

As a writer, though, she likes to explore what she isn’t through the books she writes.

“It’s fun to explore that (danger) in fiction, and I try to scare myself that way,” says the New York Times best-selling author, who was in Cebu last March 30 to promote her latest novel in the series, “Black Ice” in a book signing event hosted by National Bookstore (NBS) at the Ayala Center Cebu.

Becca said the “Hush, Hush” saga, which tells of a human falling in love with a fallen angel, was unplanned. She wrote “Hush Hush” to be a stand-alone novel until her editor got a hold of it. “When my editor got the book, he wanted a sequel,” she said. It took her one year to finish each of her sequels.

“Hush Hush” could be headed to the big screen, after Becca sold the film rights of the book to LD Entertainment, a production company.

Becca’s love for story-telling started in kindergarten, which she “hated” because of mean classmates. She recalls that before going to sleep, she and her older sister, who was in the third grade then, would make up stories about them exacting revenge on the kids on the school bus and driving it over a cliff. They called these morbid tales “The Bus Adventures.”

Later, she discovered Nancy Drew, Trixie Belden and the stories of Roald Dahl. “I loved books more than ever, and found myself split between the zany imaginative world of Roald Dahl, the spine-tingling world of Nancy Drew and the historical adventure of the Little House on the Prairie books,” Becca said.

But it was only in the third grade when she realized she wanted to become an author. This came after watching the movie “Romancing the Stone,” which starred Michael Douglas and Kathleen Turner.

“There was no turning back. I knew I wanted to be an author. Of course, I thought all authors flew to Colombia to rescue their sister from Bad Guys, hunted for treasure, and fell in love with a sexy dangerous guy in crocodile boots, in this case, Michael Douglas,” Becca said.

Surprise for an aspiring spy

Her ambitions of becoming a writer had its moments of doubt, when she wanted to become a spy. “I stalked the CIA website and filled out at least a dozen applications. I thought being a spy was dangerous and sexy,” Becca said.

But this was in college, and, of course, things change – she eventually settled down in December 2000. Then in February 2003, husband Justin gave her a surprise that would change her life as a writer: he enrolled her in a writing class for her 24th birthday.

Five years after taking the course and having a baby in between, Becca’s book was born. “The story is just about as sexy and dangerous as the spy-life I’d always dreamed about,” said Becca, who now prefers to play it safe.

A taste of the tropics

Despite her success as a best-selling author, Becca still identifies herself as a mom and a wife. “I still consider myself as a mother and a wife first, and I write after my kids go to school,” she said.

As a writer, though, she needs to travel and leave the comforts of home. The book signing in Cebu came a day after she accommodated a thousand readers in Manila. It is her first visit to the Philippines.

Alongside Mitch Albom who also recently paid Cebu a visit, Becca is among the American writers who participated in rebuilding 10 libraries in the region and restocking it with books from their personal collection.

She’s enjoyed the tropical setting, what with all the mangoes, which she loves.

“I’m loving it here. It’s so warm and it’s different from home,” Becca exclaims. “I would love to come back.”

‘The Patch’ (Farrar, Straus and Giroux)

‘Her Every Fear’ (William Morrow)