IN THE past, driving or commuting from one place in Cebu City to another would just take 10 to 15 minutes, even less. Nowadays, a mere drive from Talamban area to Mandaue could take almost an hour, especially during rush hours. Traffic in Metro Cebu has become so bad that even a navigation app, Waze, had it in dead last in terms of driver satisfaction among many other metropolitan areas in 38 countries around the world. The survey just seemingly tagged Cebu City roads as a driver’s nightmare. Well, for sure, many would nod in agreement.

In a Sun.Star Cebu news report, Cebu debuted in the Drivers’ Satisfaction Index placing 186th or the last spot on the list. The metropolitan areas were rated in categories like traffic density, road infrastructure quality, road safety and even driver services rating, which includes access to gas stations and easy parking. The Cebu City Transportation Office pointed out “some missing information” that contributed to the poor performance of the city in the said survey. However, they considered it as a challenge to formulate more effective measures to address the ugly condition of road traffic in the city.

Truly, the survey is another wake up call for everyone, local government leaders and the public, to engage in a cooperative approach to tame the roaring traffic issue. People cannot just engage in a violent road rage or whine about it in social media and not do anything about it even in one’s own little way. Today, some readers pitch in their ideas on what could be done to somehow improve the experiences of drivers traversing through the city’s chaotic road networks.

“In order to better driving experience in Cebu, I believe that both motorists and pedestrians must learn the value of discipline and obey traffic rules. Crossing in pedestrian lanes or using the overpass as well as obeying road signs and avoiding counter flows are but basic traffic rules that, if followed, will greatly contribute to easing our traffic situation. Government should improve traffic lights and train enforcers to ensure they can help address any traffic situation. LGUs should invest on equipment capable of making no-contact apprehension and impose stricter traffic laws with stiffer fines. I also think that drivers should invest on good music in their cars so they will have a happier disposition while driving, maybe that way we can avoid road rage.” — Mae Elaine Bathan, lawyer/chief of staff & executive assistant to the mayor of Mandaue City/assistant dean, USJ-R College of Law

“Widen the highways. Create alternative roads for private vehicles. Build a centralized, cost-and-space efficient mass transport system. Educate drivers properly and be strict in the process of acquiring a driver’s license. Considering the fast paced economic boom of Cebu in the past few years and with the coming of real estate giants in reclamation areas, it is high time to check what we’ve missed so badly on our way to this greatness: the need to decongest roads with better infrastructure. Be it a bus rapid transit or a subway train, the government should start investing in quality transport system as we get closer to hell every time we go to and from our respective workplaces. Let us also not undermine the importance of letting only the disciplined people man the wheel. Nobody wants to end up in a hospital bed from a trip supposed to be bound for home.” — Daryl Jabil, banking sales associate

“Given the increasing pace of economic development as evidenced by the growth of BPO’s, malls and realty developments, more chaotic road conditions are expected. There is a need for long-term improvements of road infrastructure, efficient enforcement of traffic rules, and road discipline among motorists. I also favor the proposed emergency powers for our President to address local transportation problems.” — John Christian Abesa, business development officer

“Between the main roads there are few alternative roads. For example, if there is a road accident, you cannot leave or bypass such road. Between the main roads are private properties, therefore, there is no possibility for the city government to build detour roads. It is necessary to reorganize, rethink and improve the public transportation system. There are too many cars. It is sad to see that in these big cars only one person is in it. The culture of traffic is very poor. There are no rules — driving habits are based on experience, not on rules. Nobody requires compliance with the rules. Everybody is driving like he or she is above everyone else. I cannot see any orderliness in this system. I understand that in a tropical climate, nobody likes to walk. But if you observe people, how they act in the few public spaces they have, you will understand they need safer walkways and connections, more shaded areas and sidewalks with trees and green places. Try observing the city on weekends, and try to understand why it is more livable and workable during those times. I believe the reason for traffic jams are the people themselves and their bad behavior.” –– Donat Retfalvi, architect/visiting professor (USC) 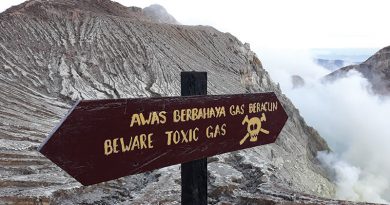