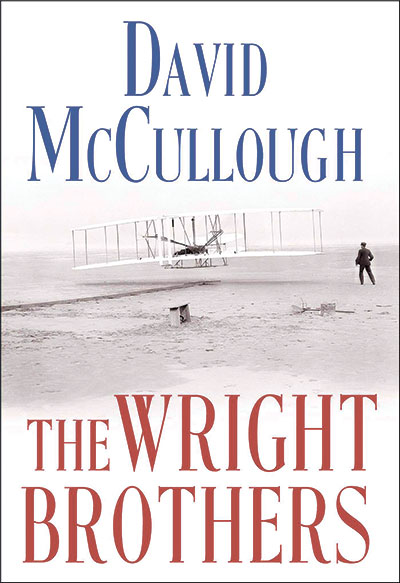 A NEW book about the Wright brothers does more than chronicle their painstaking, game-changing breakthrough in man’s flight, although that in itself would have been a draw. It reveals what truly remarkable men they were: their unparalleled work ethic, their dogged persistence, their unwavering modesty.

“The Wright Brothers,” by Pulitzer Prize-winning historian David McCullough, draws on the family’s personal correspondence and diaries to create an intimate portrait of Wilbur and Orville, from their precocious childhoods until their deaths.

Their mechanical aptitude is captured in an account from their niece, who said her uncles would play with their toys until they broke, “then repair them so that they were better than when they were bought.”

Once they officially embarked on their mission to fly — a goal a young Orville revealed to his first teacher in grade school — their thoroughness and thoughtfulness cannot be overstated. They chose Kitty Hawk, North Carolina, as their site to conduct experiments after reviewing records of the monthly wind velocities at more than 100 weather bureau stations around the country. Their success came after four years of trial and error, despite skeptics who were certain it could never be done and who questioned what useful purpose man’s flight could serve anyhow.

At times the book delves into the overly technical aspects of flight, which may be unavoidable for such a book, but can nevertheless be challenging.

Still, a reader comes away from “The Wright Brothers” inspired and humbled by the duo’s upstanding character and immense wisdom, evident in their handling of myriad setbacks both mechanical and personal. McCullough fully succeeds in humanizing these giants of history. (AP)