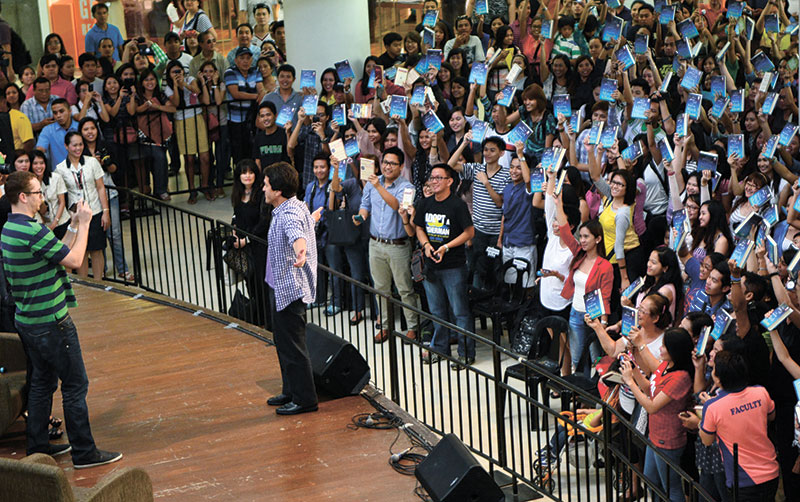 AS EARLY as eight in the morning, about a hundred fans were already queuing outside the mall to join his book signing. Three hundred more arrived by the time doors opened at 10, and when the event formally started four hours later, thousands of avid readers, clutching their copy of his latest work, were there.

International bestseller Mitch Albom, best known for the 1997 memoir “Tuesdays With Morrie,” was in Cebu the previous weekend to promote his latest novel “First Phone Call From Heaven” in a book signing event hosted by National Book Store (NBS) at the Ayala Center Cebu. The day before, he also accommodated over a thousand readers in Manila.

Albom has endeared himself to many Filipinos with his writing, having been known for his engaging way of delving into issues of morality, and particularly for his 2003 bestseller “Five People You Meet In Heaven,” in which one of the protagonists, Tala, was a Filipino child.

But despite of gaining worldwide recognition, Albom remains overwhelmed at the Filipinos’ massive reception, calling the entire experience “humbling.”

To begin with, his debut novel “Tuesdays With Morrie” was an accidental success, describing it as a “small book” initially written just to cover the medical bills of his late professor Morrie Schwartz. Having it land on the New York Times bestseller’s list, more so flying to foreign countries for press conferences, he said, never crossed his mind.

Albom was 37 years old when he started as a novelist. He already had made a name in the United States as a sports journalist writing for publications such as the Detroit Press, Sports Illustrated, GEO and The Philadelphia Inquirer. He continues to do so today, and on the side hosts a radio commentary and is a regular in ESPN shows.

Indeed, Tuesdays was the game changer. “After (it) came out, I began to have more and more people talk to me about these subjects. Instead of sports, people began talking to me about Morrie and his lessons. I was asked to speak in universities and hospitals instead of sports clubs,” he said.

Albom refuses to be associated with death, though. “I’m not a depressing writer. I use death as a mirror to reflect back on life. Everybody has to deal with the issues I write about and that’s probably why it found a large audience, even in foreign countries,” he said.

“(Readers didn’t) come up to me and say ‘your writing was astounding’ or ‘your words were amazing’ — all they talked about was how they could relate to it or that they have a Morrie in their lives. People saw themselves in it,” he said.

Albom’s books have been translated into 43 languages. Tuesdays spent four years in the New York Times bestsellers list and is hailed as the “most successful memoir published.” The book’s success ran counter to what publishers previously told him: “You don’t know how to write a memoir.”

“I wanted to publish it just to have enough money to pay for his (Morrie’s) medical bills, but almost all of them said no. They said it’s boring and depressing,” Albom recalled. “We found one publisher three weeks before he died.”

His latest work, “First Phone Call From Heaven,” a fictional account of a town that starts getting phone calls from heaven, was also inspired by a personal experience: of how he missed talking to his mother.

“For four years I haven’t heard her voice and I’m beginning to forget how she sounded,” Albom said. “I realized our connection with the human voice is so strong, that’s why we save answering machine messages when somebody dies.”

With Albom’s huge fan base in the Philippines, he was constantly invited to visit the Philippines over the years but never found the chance, until now. This is his first trip to the country but definitely won’t be his last. “To be honest, what made me say yes this time is the typhoon. I felt this is the right time,” he said, adding that he will use whatever influence he has “to call attention to the situation.”

“I see what happens after the devastation, when the media goes away and nobody is writing about it anymore. A catastrophe doesn’t end because reporters stop going,” he said.

Albom likened this to his experience in Haiti where he’s been managing an orphanage since after the earthquake in 2010. “Four years later, people are still living in tents, kids are struggling to eat, and there’s no electricity half a day,” he said.

In partnership with NBS, Albom donated 40 fishing boats to Typhoon Yolanda survivors in Tacloban City in Leyte. He also initiated a drive of rebuilding 10 libraries in the region, and restocking it with books from his personal collection. He invited other American writers to donate as well. Among those who pledged are Stephen King, Nicholas Sparks, Khaled Hosseini, John Grisham, Dave Patterson, Suzanne Collins and Lemony Snicket.

“I want to help out in some way. I didn’t want to come to the Philippines and just talk about myself,” he said.