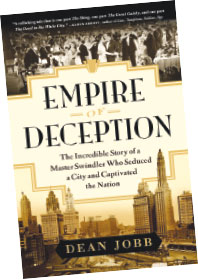 YOU’VE heard of Charles Ponzi, the swindler who gave big returns to early investors using money from subsequent clients. And you’ve heard of Bernie Madoff, imprisoned for one of the biggest Ponzi schemes in history.

Chances are you’ve never heard of Leo Koretz. A new book, “Empire of Deception,” argues that Koretz belongs with Ponzi and Madoff in the con man hall of fame.

Koretz’s pyramid scheme, played out against a backdrop of crime and corruption in booming 1920s Chicago, eventually entailed millions of dollars invested in a phony agriculture and oil project on Panama’s Bayano River. Early clients were paid high interest using money from the next wave of victims, which whetted their appetite for more and stoked Koretz’s reputation.

Koretz excelled at hooking victims, increasing their eagerness by first turning them away. When investors traveled to Panama to check out the project, Koretz vanished, leaving behind stunned relatives and embarrassed clients — many of them wealthy despite their losses and reluctant to acknowledge that they’d been scammed.

Here the story gets even more entertaining. Koretz flees to New York, then to a Nova Scotia resort, where he resumes his lavish lifestyle under a false name. He’s unmasked by an incredibly mundane detail — a jacket with his real name inside.

A con man to the end, he manages to cheat the public of any sense that justice was served. He pleads guilty, avoids trial and gets a sentence that offers parole in a mere 11 months. Severely diabetic, he died in prison within two months, with some saying he induced his death through diet.

Author Dean Jobb has fun mining details of the case from the era’s sensationalistic newspapers. Readers may wish for more insight into what made Koretz tick, but there’s not a lot to go on, other than the author’s speculation that Koretz’s boyhood immigration experience might have shown “how easily a shrewd operator could relieve people of their money” as he watched ticket agents, money changers, baggage handlers and bureaucrats fleece new arrivals.

Jobb also notes that Koretz’s persuasive abilities stood out early on his high school debate team and as a champion fundraiser for any cause. Even then, Jobb noted, Koretz was good at “separating people from their money.”

Jobb’s parallel story of the prosecutor who pursues Koretz feels less compelling, but overall, this cautionary tale of 1920s greed and excess reads like it could happen today. (AP)