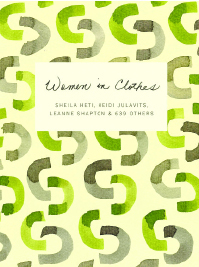 IN 1995, an advertising executive named Ilene Beckerman narrated her life story through the clothes she wore at different ages. Nearly 15 years later, Nora and Delia Ephron turned her whimsical conceit for an autobiography into a smash off-Broadway hit.

Now novelists Sheila Heti and Heidi Julavits and writer/illustrator Leanne Shapton have enlisted 639 women around the globe to fill out surveys about what they wear, why they wear it and how it makes them feel. Their responses — which touch on everything from body image and fragrance to makeup and mothers — are mingled with celebrity interviews, personal essays, quirky illustrations and photographs to form a crowd-sourced style guide that manages to be both charming and exasperating.

Due to sheer size — it’s 500 pages — you’re bound to find things that strike you as smart, funny and true, such as this tidbit from a 63-year-old hospice nurse: “My mother-in-law once said, ‘Save all the pictures of yourself that you hate. In 30 years you’ll think you look fabulous.’”

Other contributors come off as twee, self-involved or pretentious, such as the woman who calls a phase of her life a “Gesamtkunstwerk,” German for total work of art.

Still, give the authors credit for soliciting a wide range of voices beyond the book’s obvious target audience — a youngish, artsy, Etsy-shopping crowd. There’s a Muslim homemaker who believes “the purpose of clothing, as defined by God in the Quran, is to cover your body”; a former rancher who likes pearl snap button shirts with pockets to stash her cigarettes; a transgendered woman reflecting on her new life in a female body; and a journalist who’s investigated garment factories abroad and knowing the conditions, can no longer shop at certain popular retailers. In a book that devotes a good deal of space to consuming, she says, “I hardly ever shop because I hate having things.”

Bottom line: Don’t buy this book if you’re looking for fashion edicts like “A woman can’t be too rich or too thin.” You won’t hear from such establishment tastemakers as Vogue editor-in-chief Anna Wintour.

Instead, you get this sort of advice: “Wear whatever makes you less sad and feels right when it’s on.” That’s from Margaux Williamson, the Toronto painter featured in Heti’s 2012 novel “How Should a Person Be?”

This is the wisdom of the crowd, and while it’s not authoritative or prescriptive, it’s reassuring and fun. (AP)

‘The Outsider,’ a novel by Stephen King (Scribner)