Johnson survives the rubble that is Rampage - Weekend

USUALLY paired with smaller companions like Kevin Hart or Moana, Dwayne Johnson is for once the diminutive one in “Rampage,” a hopelessly bland and bizarrely self-serious monster movie.

Johnson plays primatologist Davis Okoye in Brad Petyon’s adaption of a classic 1986 arcade game. Naturally, Okoye has some covert military history but — like so many highly trained international commandos — he’s now working at the San Diego Zoo. His time is especially focused on a hulking albino gorilla named George. They are pals, Davis and George, who fist-bump and play pranks on one another.

The two are actually a winning pair, but “Rampage,” unfortunately, isn’t the Rock-and-monkey buddy comedy (“The Guerrilla and the Gorilla”?) we might crave. “Rampage” is professional-looking, thanks to the well-integrated effects artistry of Weta Digital. We have become spoiled, perhaps, by affecting computer-generated primates thanks to the “Planet of the Apes” franchise. But George (played with motion capture by Jason Liles) still holds his own in the monkey-movie kingdom.

And Johnson, so recently in the jungle for “Jumanji,” remains a truly indefatigable movie star capable of carrying even the most half-baked of premises with colossal charisma. “Rampage” would surely sink a less sturdy action star, yet even here the wayward mishmash of monster-movie tropes only seem to ping off him like bullets deflected by Superman.

The objective of the original 8-bit video game was to, while controlling one of three giant monsters (a gorilla, dinosaur or werewolf), reduce a city to rubble. Naturally, a story of such pathos and originality brought Hollywood rushing with a check for millions.

What the film’s writers — Ryan Engle, Carlton Cuse, Ryan J. Condal, Adam Sztykiel — have come up with from this skeletal concept is something overly elaborate and curiously humorless. The film opens ominously in space, where a genetic experiment has created a giant mutated rat that chews up the space station’s crew, but not before an escape pod with three samples shoots back to Earth.

The canisters of serum land alongside an alligator in the Florida Everglades, a wolf in Wyoming and at George’s habitat in San Diego. Each quickly swells massively while simultaneously becoming increasingly aggressive. (With a slightly different trajectory, we might have gotten a more unpredictable mutant trio like maybe a cockatoo, a koala and Keith Olbermann. Now that would be interesting.)

The company behind the trials tries to quietly recapture the lab results. Malin Akerman, the fine actress of “Billions,” plays its ruthless chief executive, alongside her more clueless brother, played by Jake Lacy. Meanwhile, a consortium of military and government agencies try and fail to capture or kill the beasts as they converge on Chicago. Naomie Harris plays a genetic engineer.

But the only performance really of note in “Rampage” is by Jeffrey Dean Morgan, who plays an agent for an unnamed government agency with wild-eyed, cowboy abandon. The scenery might be digital, but that doesn’t stop him from trying to chew it all.

As a product that reunites the director and star of “San Andreas” and “Journey 2: The Mysterious Island,” ”Rampage” is similarly forgettable popcorn fare that, in almost every scene feels like a knockoff of something else. And it should be funny. Movies about giant mutant animals that flock to the Windy City really ought to be funny. Morgan seems to be the only one to realize that in monster camp like this, go big or go home. (AP) 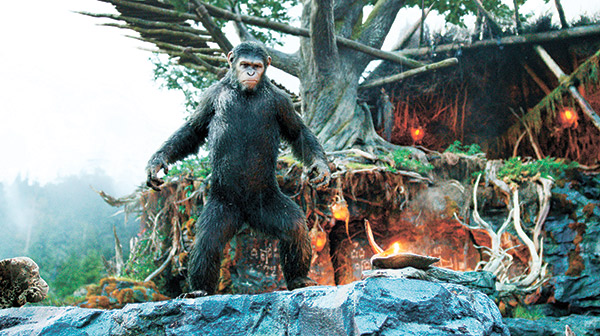 No monkey business in ‘Planet of the Apes’ 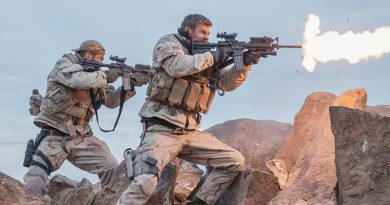 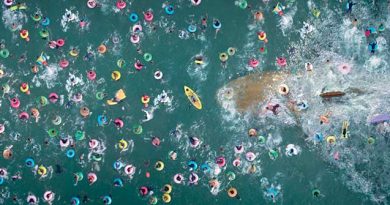