A few good scares can’t hold 'IT' together - Weekend

HERE’S the good news: Pennywise is as creepy as ever in the new “It .” Thanks to a bigger budget and some improved special effects some 27 years later he really gets the chance to spook the kids of Derry, Maine.

Bill Skarsgard (Son of Stellan, brother of Alexander) has infused Stephen King’s killer clown with a pathological menace that’s more reminiscent of Heath Ledger’s Joker than Tim Curry’s goofily sadistic take on the character in the 1990s miniseries adaptation. It helps that he’s gotten an upgraded makeup job and a more antiquated (and scarier) costume of 17th century ruffs and muted whites. His teeth are bigger, his hair is less cartoonish, his eyes are more yellow and his mobility has become terrifyingly kinetic.

Indeed, the new “It” goes all-out with the horror in Part One of the story, which is focused on the plight of a group of children in the 1980s who are haunted and hunted by a clown only they can see. Things that the miniseries only alluded to are depicted with merciless glee. Did you want to see a gang of bullies cutting a kid’s stomach? “It” has that. Or witness a father looking lustily at his pre-teen daughter? “It” has that too.

The bad news is that “It” still doesn’t add up to much.

Directed by Andy Muschietti, “It” is a deeply hateful film with the pretenses of being an edgy throwback genre mashup, a la “Stranger Things.” One of the “Stranger Things” kids even has a part in “It”: Finn Wolfhard plays the jokester Richie. The other kids just look like they might have been part of the Netflix series — Jaeden Lieberher as Bill, Sophia Lillis as Beverly, Chosen Jacobs as Mike, Jack Dylan Grazer as Eddie, Wyatt Oleff as Stanley and Jeremy Ray Taylor as Ben.

But unlike, say, “Stranger Things,” or horror films that lull you in with familiar circumstances before introducing the insane, there is nothing remotely relatable or realistic about this setting. This makes it especially hard to connect or engage with the tormented kids. Both the parents and bullies are like fun-home distortions of recognizably cruel humans.

With three credited screenwriters (Chase Palmer, Gary Dauberman and Cary Fukunaga, who was originally set to direct) the story is an unforgivable mess. Instead of building tension and suspense, “It” just jumps from scene to scares with no connection or coherence to thread them together other than the mere fact that they’ve been placed on top of one-another, like toys mixed up from different sets.

And yet “It” does have a few tricks up its Victorian ruff. The largely unknown kids of the losers club are good, with standout performances from Lieberher (“Midnight Special”), Taylor and Lillis with her perfectly ‘80s Kerri Green-vibe. And there are a few guaranteed jump-out-of-your-seat moments, including the flawlessly rendered opening with Georgie, the toy boat and the sewer that has continued to haunt generations of kids who either read King’s book or caught the now cheesy looking miniseries on TV too young.

With the R-rating, you do have to wonder who this “It” is really for — the now-grown kids of the ‘80s and ‘90s who were traumatized the first time around and can’t get enough of their own nostalgia? Or is it just a dare for the under-17 crowd, who are more likely to forgive the story flaws and just submit to the scares?

Like so many movies now, “It” is an intentionally incomplete tale — a story-setting teaser for what’s to come in Part Two. Maybe by the time that comes out the kids who snuck in to this “It” will be old enough to harbor their own wistfulness for the first they saw Pennywise. And then there’s the scarier thought: Will the cycle just continue until we’re all floating endlessly in our own nostalgia? (AP) 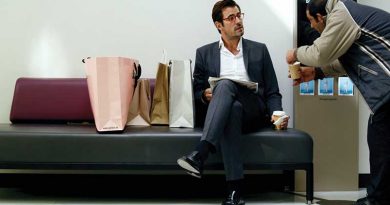