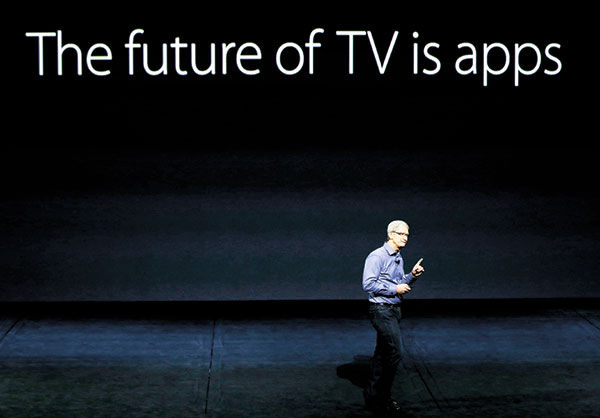 APPLE staked a new claim to the living room on Wednesday, as the maker of iPhones and other hand-held gadgets unveiled an Internet TV system that’s designed as a beachhead for the tech giant’s broader ambitions to deliver a wide range of information, games, music and video to the home.

Apple is counting on sales of the new iPhones to maintain its position as one of the most profitable, and valuable, companies in the world.
But it’s the new Apple TV system that some analysts point to as an important step for the company as Cook attempts to build a business that doesn’t rely so heavily on the iPhone.

“Apple is laying the groundwork for a broader living-room strategy” said analyst Ben Bajarin from the research firm Creative Strategies. Apple wants to make the already-important TV screen into an essential hub for communication and entertainment, he said.

“TV plays a huge role in our lives and it occupies an important place in our homes,” Cook said during his presentation. He added that Apple believes “the future of television is apps” that deliver streaming video, games and other services.

For now, however, the iPhone is still Apple’s most important product. Sales of the iconic smartphone contributed more than two-thirds of the Cupertino, California, company’s $107 billion in revenue during the first half of 2015.

Apple announced it will sell two new iPhone models, dubbed the 6s and 6s Plus, starting Sept. 25. They’re roughly the same size and will cost the same as the record-selling 6 and 6 Plus models introduced last year, which will now sell for $100 less. (AP)

Tech Tips: Stuff you didn’t know you could do on Facebook