Adventure of the century: a review - SunStar 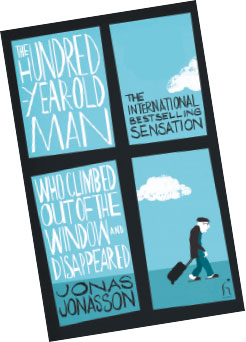 THE Hundred-Year-Old Man Who Climbed Out the Window and Disappeared is the first book written by Swedish author Jonas Jonasson. What makes this book stand out from the rest is its title — it’s long, it takes up almost all the space in the book cover, and of course, it blatantly describes what this story is all about.

Jonasson’s debut novel is about a centenarian named Allan Karlson who, during his birthday, climbed out the window of the retirement home he lived in and went on an epic journey that involved a drug dealer, a bagful of money, an elephant, the Manhattan Project, Einstein’s dimwit half-brother, Stalin, Harry Truman, Mao Tse Tung, and other historical figures during World War II.

The Hundred-Year-OId-Man is an action-packed novel that shows history in a funnier light and tells you how Allan helped shape the world — without him even knowing it. The events are so absurd, they turn out to be funny, even if it meant killing off a character in the most far-fetched way imaginable. What I love most about this book is that you can read it without really thinking, because the book is really spontaneous, but at the same time, it gives you the chance to learn about the back story of major historical events.

If you’re looking for an easy and lighthearted read but don’t want to sacrifice time and money on a book that’ll make you stupid for that purpose, you will want to read The Hundred-Year-Old-Man.

This has just been made into a film this year, starring Robert Gustafsson.

A test of faith

‘M or F?’: For the young and adventurous

Karla Quimsing’s Pancit Poetry a melange of tones and voices